For thousands of years wine has been a beverage that has sustained, complemented, nourished and supported mankind. Wine is a natural product and it could be argued that the first wine was made when a grape was punctured, by a creature, or simply falling to the ground, and the sweet juice came into contact with yeast on the skin of the grape, and fermentation occurred. Man discovered how to master this conversion of fruit to wine and learned how to enjoy the benefit it gave. In simple terms very little has changed. Grapes grow, are harvested, crushed and wine is produced. However over those years the winemaker has gained experience from preceding generations and applied the knowledge to the point that wine can be immensely rewarding and make a real contribution to a contented life.

Can a winemaker be compared to an artist or conductor? Possibly! An artist chooses his canvas, brushes, paints and inks, and 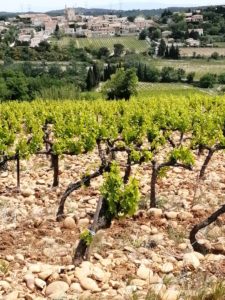 A vineyard in the Rhone valley

applies his skill. A conductor leads an orchestra, how and when each section plays, the tone, the sound and the timing. No two artists painting the same scene will have identical finished products any more than two performances of the same piece by different conductors will sound the same. Two winemakers given the same plot of land and the same grapes will produce different wines. They choose their tools – when to harvest, grape selection, fermentation time, spontaneous or cultured yeast, use of steel or wood and type of wood, bottle ageing before release and so on. Their art is to assemble these components and produce a finished product bearing their signature.

Can a bottle of wine be as rewarding as an opera? And can the same bottle of wine, opened in different circumstances be as variable as a painting seen in a certain light or mood? There is, perhaps,  no right or wrong answer, but it is a fact that wine is a living thing and evolves and changes over time. Differences in vintages, regions and grapes might be subtle or extreme, but they are there and waiting to be discovered, and it is a great and rewarding journey to take – fun and entertaining too.

How has wine influenced art?

Looking back over time wine has played an integral part in society since 7,000 B.C. probably longer. The first benefit of wine might well have been the effect it produced. All those years ago life was hard and anything that gave succour would have been a welcome addition. It has had a role in medicine and faith and was one of the first traded commodities when it made its way from the Caucasian mountains to Mesopotamia, via the highways of trade, the Euphrates and Tigris rivers. It is mentioned in the Bible 231 times, and a number of times in the Quoran, although Mohammed condemned it alongside gambling. Countless works of art depict wine in various forms from paintings to silverware to tomb drawings. 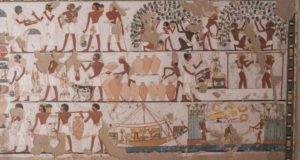 The image above is from the tomb of Khaemwaset, circa 1213 B.C. and depicts the whole process from vineyard to export. And little has changed, although is is rare to find a high priestess invoking the god of harvest in a modern day cellar.

We have the evidence that this beverage has been with us a long time, and we know that the actual growing and fermentation process is as it has always been. It is the skill of the winemaker and viticulturist that has changed and they have been able to study and harness the best attributes of soil and science to craft wines that vary from the regular to the exceptional. Wine will always serve a purpose from kitchen suppers to weddings, to banquets.

The Hittites of Anatolia

The silver stags head pictured here was crafted by Hittites in Anatolia between the 15th and 13th centuries B.C. It would have been used in libation or as a drinking vessel by priests. The relief is decorated with three figures making offerings to a goddess on a stool and a god who stands on the back of a deer. 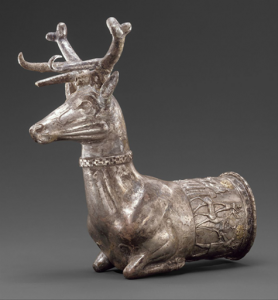 Towards the end of his life Poussin painted the Four Seasons, a set of paintings with a Biblical theme from the Old Testament. Autumn, The Spies with the Grapes from the Promised Land, depicts two of the twelve men Moses sent to explore Canaan returning with a great bunch of grapes. They reported they had found a land of milk and honey. They also found grapes, and the painting portrays the importance of the fruit, as evidence of the fertility and promise of the land. The Bible mentions wine 231 times, and the biblical reference to wine has been the inspiration of much art. 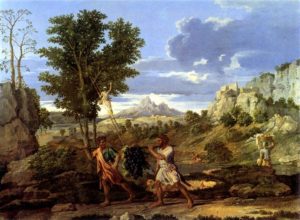 Autumn, The Spies with the Grapes of the Promised Land. Louvre

Duty is the tax levied on wine. It is reviewed by the treasury every year at budget time, typically it increases however in March 2020 the chancellor left it alone.

The duty on table wine that does not exceed 15% alcohol is £2.23* per bottle and subject to VAT on top.

Non EU producers are subject to an additional CCT (Common customs tariff) charge. Chile has negotiated out of this and it is not levied on wines from there. Therefore in addition to the duty above, for example from Australia, there is another 10p per bottle on table wine. A bottle of Jacobs Creek (an inexpensive Australian brand) attracts higher ‘tax’ than a bottle of Chateau Latour (which sells for several hundred pounds per bottle) .

If you take the average price of a bottle of wine in the UK at circa £5.50, deduct the VAT of 20%, a margin for the retailer, and then take of the duty at £2.23 per bottle, you will see there is little left for the value of the wine, let alone the glass, transport, label and carton.

UK – The most popular countries

In the United Kingdom stats abound regarding the wine trade, but one of the most interesting is to see which country has the highest volume of sales in the retail sector*.

The species of vine from which most wine is made is the cultured Vitis vinifera sativa as opposed to Vitis vinifera sylvetris (wild). Evidence of this variety being used in production has been found in Georgia dating back to 5,000 B.C.

Phylloxera is an aphid that came to Europe from America via the Victorian travellers and botanists that collected so many species of, well everything! It is an aphid that damaged the vineyards of Europe and elsewhere to devastating effect in the mid 19th century. It attacks the roots of the vine which subsequently keels over and dies. It took some time to discover the remedy which was to graft European stock on to American roots. There are regions it didn’t reach such as Chile, whose natural boundaries of sea, mountain desert and lakes seemed to keep the critter out.

Hammurabi, king of Babylonia 1792 to 1750 B.C. composed a collection of rules, 282 in total, written into a massive stone steele (pillar) made of diorite. The rules covered many aspects of life and are written in the if -then form. Concerning wines two codes are:

Grim reading for the wine sellers of Mesopotamia, and notable that the sellers were female.

THE ARTS SOCIETY WINE OFFERS, BROUGHT TO YOU BY DAVID ALEXANDER- WINE MERCHANTS